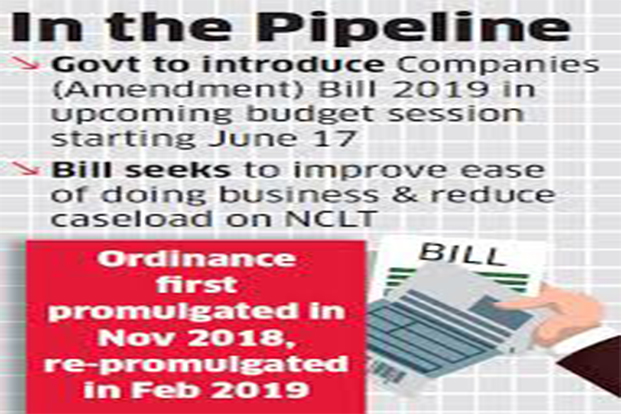 The revolutionary advent of Companies (Amendment) Bill, 2019; has broadened the purview of “Corporate Governance” framework.  Before the current session ends, the Government will move close to 138 amendments by scrapping 58 laws

Key Highlights as proposed by Union Cabinet are as follows :

(i) Ease of doing business

(v)
(a) New amendments shall make it impossible for Companies to escape “Corporate Social Responsibility(CSR). Since, mandatory for companies to create a ring-fenced “escrow account” for CSR expenditure and transfer unused funds to National CSR Fund in a given fiscal year for upto 3 yrs.
(b) If Company doesn’t have an ongoing project that requires funding in stages, required to transfer unused CSR Funds at end of fiscal yr .
(c) If any amount is part of an ongoing project, that requires funding in stages.
(d) Any exp. due for that fiscal, that is not spent for 3 yrs will need to be transferred to a “National CSR funds”, as per changes

(vii) Expansion of existing base under Secretarial Audit

(viii) Move National Company Law Tribunal (NCLT) seeking to declare a director or person connected with fraud conduct and management of any company not fit and proper to hold the post, as KMPs.

(xi) New business concepts to give philip to Start-ups, expanding their base and opening new areas for professionals
(a) Restrictions on shares with differential voting rights, making it easier for Promoters of start-ups to raise equity capital.
(b) Resolution Professional to make presentation on alleged frauds

(xii) Proposal to carry out 7 amendments to Insolvency and Bankruptcy Code (IBC), 2016 in different phases., by clearing roadblocks for resolution process & smoothening process to save time, maximisation of value of a Corporate Debtor

(xiii)
(a) 330-day deadline for corporate resolution process, including litigation and other judicial processes, as well as make resolution plan binding on all stakeholders.
(b) Govt. set up a “Screening Committee” to track the status of Bankrupt cases in which Promoters are suspected to have siphoned off funds  to include members of MCA & IBBI. Avoiding insolvency proceedings holds Promoters responsible for carrying out transactions with an intenet to defraud firm’s that are already in distress.
(c) Financial creditors to be given more importance under Insolvency
(d) Govt. to track the status of Promoters involvement in Bankrupt Co’s